Rum is distilled from a mash of sugarcane products, such as molasses. Accordingly, most rums are imported from countries where sugarcane is a major crop, such as Barbados or Jamaica. Due to its origin from sugarcane, most rum has a touch of sweetness and blends well with fruit juices; premium rums can also be consumed straight. It is distilled to approximately 80 proof or higher (flavored or spiced rums may be lower).

These terms commonly appear on rum labels. For more information, please ask the staff at your Virginia ABC store.

Aged
Aging for rum can be as short as one year for white rum and three for amber. Aging is usually done in oak barrels.
Amber
Gold
Amber or gold rum has typically been aged in charred oak barrels and not filtered for color. It is fruitier than black rum, and stronger and more complex than white rum.
Blended
Most rums are blended from rums of different ages and origins, assuring a consistent flavor profile and proof. Even rums labeled as “single barrel” are often premium blends that have been re-casked for the purpose of additional aging.
Cachaça
Cachaça is a Brazilian spirit distilled from fresh sugarcane juice, rather than molasses. In 2013, the U.S. government formally recognized cachaça as a type of rum and a distinctive product of Brazil, bottled at not less than 80 degrees proof. Its aroma and taste have been described as fruitier, greener and more tequila-like than that of rum. It is the base spirit of the Brazilian national cocktail, the Caipirinha.
Black
Dark
Black or dark rum is made from molasses and usually aged longer than other types of rums, usually in charred oak barrels. Its color derives from molasses and the aging process (although some brands may add caramel coloring). It tends to have a stronger molasses flavor. This rum is popular in cooking.
Flavored
Rum that has been infused with fruit or other flavoring. Flavored rum is usually less than 80 proof. Light rums are typically used for infusion.
Jamaican
Traditionally, Jamaica produces black rums, which is also true of other former English colonies in the Caribbean (Barbados, Guyana, Trinidad).
White
Light
Silver
White, light or silver rum is sweet but colorless and has the mildest taste profile of all the rums, making it popular in cocktails.
Navy
Navy rum is a blend of aged and unaged rums, usually dark. “Navy strength” refers to a proof of 100 or higher, as traditionally required in the British navy for the daily rum ration.
Overproof
Rum that has been distilled to higher than 80 proof. Generally for mixing.
Premium
Select
Estate
Premium or select rums have been aged and, like cognacs or tequilas, may be designated as "XO" or "anejo." These rums may also be referred to as "estate" or "handcrafted," due to the care taken in the blending or distilling process. These black and amber rums are generally consumed straight.
Puerto Rican
Traditionally, Puerto Rico produces amber rum, which is also true of other former Spanish colonies in the Caribbean (such as Cuba).
Rhum agricole
A distilled spirit similar to rum; like cachaça, rhum agricole is made from sugarcane juice, rather than molasses. It is produced in former French colonies, such as Martinique and Haiti. It is fruitier than molasses-based rum.
Spiced
Rum that has been infused with spices, such as nutmeg, cinnamon and vanillas. Spiced rum is usually less than 80 proof. Premium spiced rums are made from gold or amber rum.
Cuban rum has not been imported into the United States for some time, but as diplomatic relations become normalized, that may change. Currently we have no time-frame for selling rum produced in Cuba, but at some point in the future the spirit could be seen again on Virginia ABC store shelves. As with other former Spanish colonies, such as Puerto Rico, Cuba predominantly manufactures amber rums. 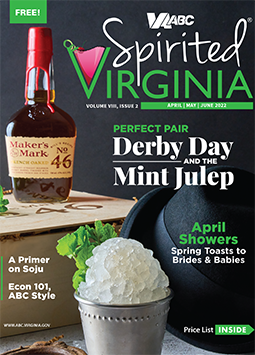