"America's native spirit" (S. Res. 294), bourbon whiskey has been enjoyed by generations of devotees, from Mark Twain to Harry Truman, and is currently experiencing a tremendous boom in popularity. It generally has a sweeter taste than scotch whiskey, with each bourbon exhibiting a distinctive flavor based on its recipe, distillation and aging. Along with rye whiskey, bourbon is the most frequently used whiskey in cocktails. It can also be sipped neat or consumed over ice.

These terms commonly appear on bourbon labels. For more information, please ask that staff at your Virginia ABC store.

Aged
All bourbons must be aged or stored for some length of time. Aging mellows the taste of bourbon and imparts desirable flavor characteristics as the distillate interacts with the charred oak barrels. Straight bourbons must be aged at least two years, but most are aged longer; if less than four years, the age must be stated on the label. All age statements reflect the youngest bourbon in the bottle (27 CFR 5.40). Some premium bourbons may be aged much longer, even decades.
Barrel
Cask
Barrels are a crucial aspect of creating bourbons, since they have a great influence on taste. Bourbons must be aged in charred new oak containers; in some bourbons, additional aging may occur in other containers. Also see "oak" and "finish."
Bottled-in-bond
Bottled-in-bond is not a separate type of bourbon, but rather a straight bourbon that has been produced and bottled in accordance with the Bottled-in-Bond Act of 1897 (see 27 CFR 5). Among other requirements, these bourbons must be at least four years old; bottled at 100 proof; produced in a single distillery, by the same distiller; be the product of a single season and year; and stored and aged in a bonded warehouse. While this is not a guarantee of quality, usually only the best bourbons are selected for this process.
Bourbon
"Bourbon" whiskey must meet specific legal requirements (see 27 CFR 5.22). These include at least 51 percent corn in its mash, be distilled not exceeding 160 degrees proof and be stored in charred new oak containers. Other grains used in the mash traditionally are rye and barley and sometimes wheat (see "wheated"). The specific proportion of the grains used (the "mash bill") is one reason that each bourbon has a distinctive taste. To be called bourbon, the whiskey must be produced in the United States.
Finish
Beyond initial barreling and aging, some premium bourbons are "finished," or undergo additional aging, in secondary oak containers, such as port wine barrels or sherry casks, imparting flavor complexity. The term "finish" is also used to describe how a bourbon's taste lingers in the mouth, its aftertaste.
Handcrafted
Hand-selected
There is no legal definition for these terms, but they may be used to indicate higher quality products. Bourbons can be crafted or selected by hand in a number of ways, whether in identifying barrels for additional aging or in the blending and bottling process.
Kentucky

Kentucky is by far the largest producer of bourbon, accounting for over 90 percent of all bottles. Historically, one reason for this is that Kentucky is located on a massive limestone aquifer, providing a water supply that is naturally filtered and rich in minerals that promote fermentation.
Oak
Bourbon must be aged in new charred oak containers. Oak contains flavoring compounds that, especially when charred, interact with bourbon to enhance body, aroma and taste. Different types of oak will affect bourbon differently. American white oak (Quercus alba) is most common, and imparts vanilla and coconut flavors; European or English oak (Quercus robur) and French oak (Quercus petraea) are occasionally used, especially to "finish" bourbon, and impart spicier flavors.
Single barrel
A single-barrel bourbon has been bottled exclusively from one barrel, which has been selected for its quality and set aside for additional aging. Differences in storage conditions for each barrel create distinctive taste characteristics, which are preserved in the exclusive bottling. Generally, single-barrel bourbons are premium products and are best consumed straight or on the rocks.
Small batch
Small-batch bourbons are typically blended prior to bottling from a limited number of select barrels, allowing manufacturers to have greater control in shaping taste characteristics. There is, however, no specific legal definition for this term.
Sour mash
Sour-mash bourbons typically take a portion of the spent mash from one batch and use it to jump-start fermentation in the next batch. This assures consistency of flavor between batches and, more importantly, increases the acidity of the new mash to create perfect conditions for yeast fermentation and to limit the growth of undesirable bacteria. "Sour mash" does not mean that the taste of the bourbon is sour.
Straight
In addition to meeting other bourbon requirements, "straight" bourbons are aged at least two years and blended only with other bourbons produced in the same state—for example, "Kentucky straight bourbon" (27 CFR 5.22). "Straight" does not necessarily mean that the bottle contains bourbon from only one barrel (see "single barrel"). If a bottle states specific aging for a straight bourbon, then it reflects that age of the youngest bourbon used.
Wheated
Wheated bourbon uses wheat instead of rye as the secondary grain (corn remains the primary grain). These bourbons may be termed "wheaters"; typically they have a softer, slightly sweeter taste than bourbons that use rye.
Many bourbons are so rare that they are offered in limited numbers for a brief period of time during the year. Virginia ABC strives to make the distribution of these products as efficient and equitable as possible. For more information about these "limited availability" bourbons, please visit the Limited Availability Products page. There are many great resources online to explore bourbon, including the American Bourbon Association and the Kentucky Bourbon Trail. 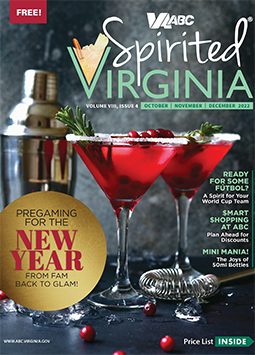