September is Virginia Spirits Month and we are honoring Virginia-made spirits with a Sale-A-Bration! Throughout the month of September, you can save 20% on 132 Virginia-made spirits from over 30 Virginia distillers, all of which are subject to availability. Participate in-store, online or visit a participating distillery store.

What pairs well with Virginia-made spirits? Virginia-made mixers of course! Sparkling, sweet and even spicy, these local brands are just what you need for stirring something up. Navy Hill products are a great base to any cocktail. Start with their Original Soda + Tonic or some flavor with one of their flavored mixers. For something sweet, try one of Keep it Simple Syrup’s five flavor variations or Poe’s Phantastic Simple Syrup.

From the Blue Ridge to the Bay, Virginia distillers carry on the tradition of distilling spirits. George Thorpe, an English settler in Jamestown, distilled the first batch of Virginia-made whiskey by substituting corn for European barley in 1620. George Washington was also credited for his participation in spirits distillation. In 1799, his distillery at Mount Vernon produced over 11,000 gallons of whiskey, making it one of the largest distilleries in America at the time. Today, George Washington’s distillery continues to operate and offers a limited amount of product annually. Over four hundred years later, Virginia distillers produce over 100 distilleries across the state.

Virginia-mixed cocktails are created by your favorite Virginia bartenders, restaurants and distilleries. Looking for your signature cocktail? Learn how to mix up something innovative and local, like the Lime Rosé Spritzer, Buskey Island Cooler and The Fresh Up Fizz. And be sure to pick up Virginia-made spirits, wines and mixers to craft these commonwealth favorites. Cheers to local mixology! 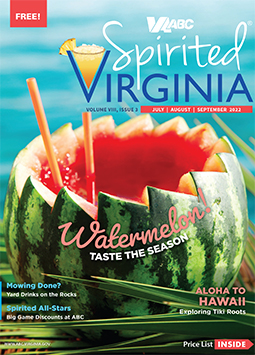